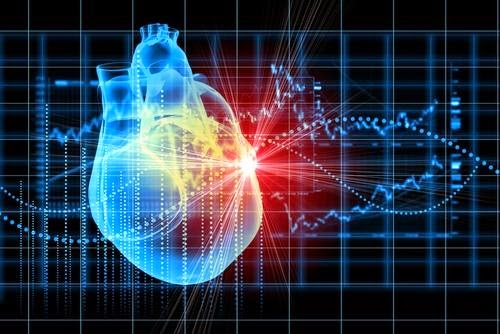 People with mental health problems are “significantly” more likely to have stroke or heart disease, according to a study unveiled at a recent Canadian Cardiovascular Congress.

To continue this article, please click here.
Posted by Unknown at 8:47 AM No comments:

Thank you for your continued support!
Posted by Unknown at 6:39 AM No comments:

Valenrich Wellness on the MOVE!

Over the past few months,
Dr. Nadia Richardson of Valenrich Wellness has had the opportunity to
speak at some exciting and inspiring events.

Some of these events include:

The Living in Purpose Women's Ministry 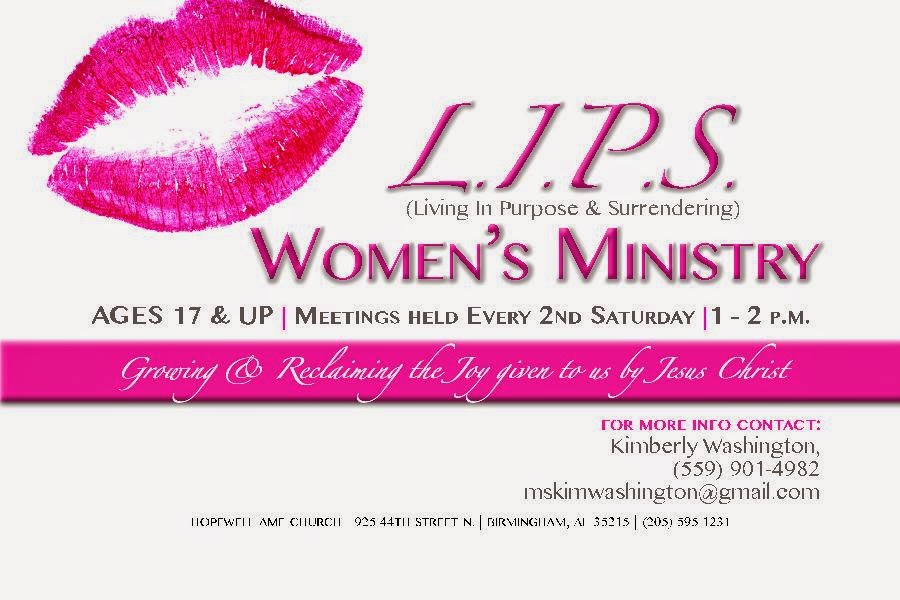 Continue to follow Valenrich Wellness in order to stay up to date on
our mental health awareness activities.
Posted by Unknown at 6:27 AM No comments:

James Hickman was recently featured in a story for Huffington Post. In his book, The Mindful Son, James shares his story of living with schizophrenia and becoming a licensed clinical social worker and psychotherapist. James is also a featured presenter with the Valenrich Wellness speaker's bureau. Learn more about James Hickman at www.themindfulson.com and Valenrich Wellness as www.Valenrich.com. 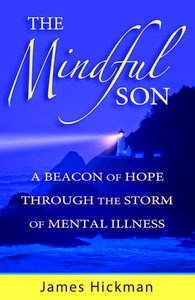 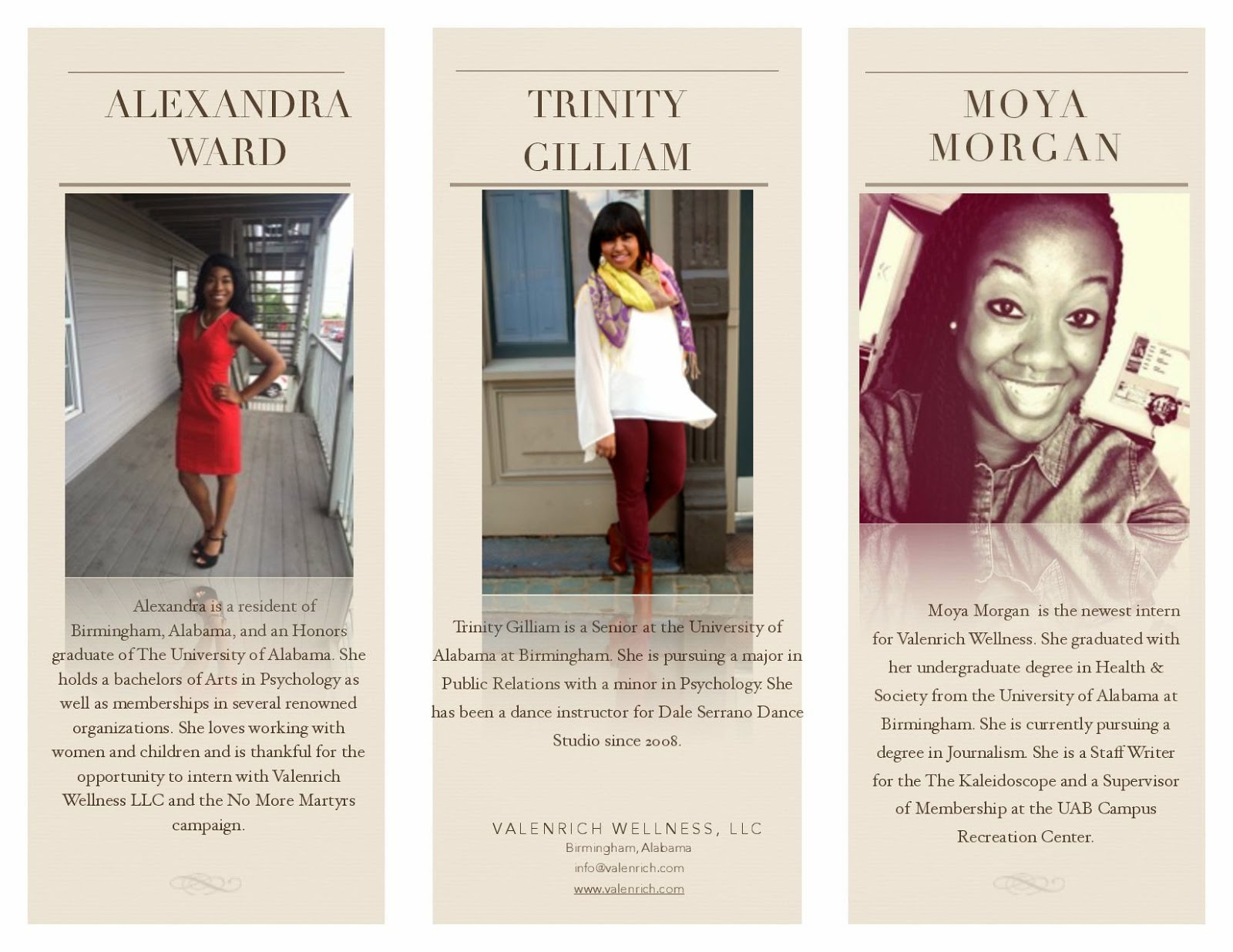 Please join me in welcoming 3 phenomenal young women who have been selected to serve as Valenrich Wellness interns. Thank you for the wonderful work you do! Your contribution is invaluable!!!! Learn more about Valenrich Wellness, LLC and our work to dismantle mental health stigma by visiting www.Valenrich.com.

Active Minds Send Silence Packing comes to the University of Alabama at Birmingham! 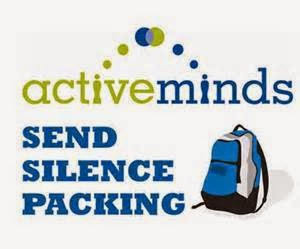 On September 25, 2014, the University of Alabama at Birmingham (UAB) hosted one of the most effective, eye-opening events, to inspire action against suicide; Send Silence Packing. Send Silence Packing is a traveling exhibit that is currently on a 6 week tour to raise awareness about the incidence and impact of suicide on college campuses.  Gaining national recognition since its start in 2011, the exhibit, which is administered through Active Minds, has reached over 300,000 students nationwide.  Active Minds is a nonprofit organization that seeks to empower students to change the perception about mental health on college campuses.


Fortunately, I was able to attend and witness the heart-wrenching exhibit. Exactly 1,100 backpacks were spread across the campus green of UAB, all representing the numbers of students that lose their lives to suicide every year. On some of the backpacks were adorned with laminated stories and tributes from family members and friends who had lost loved ones to suicide. 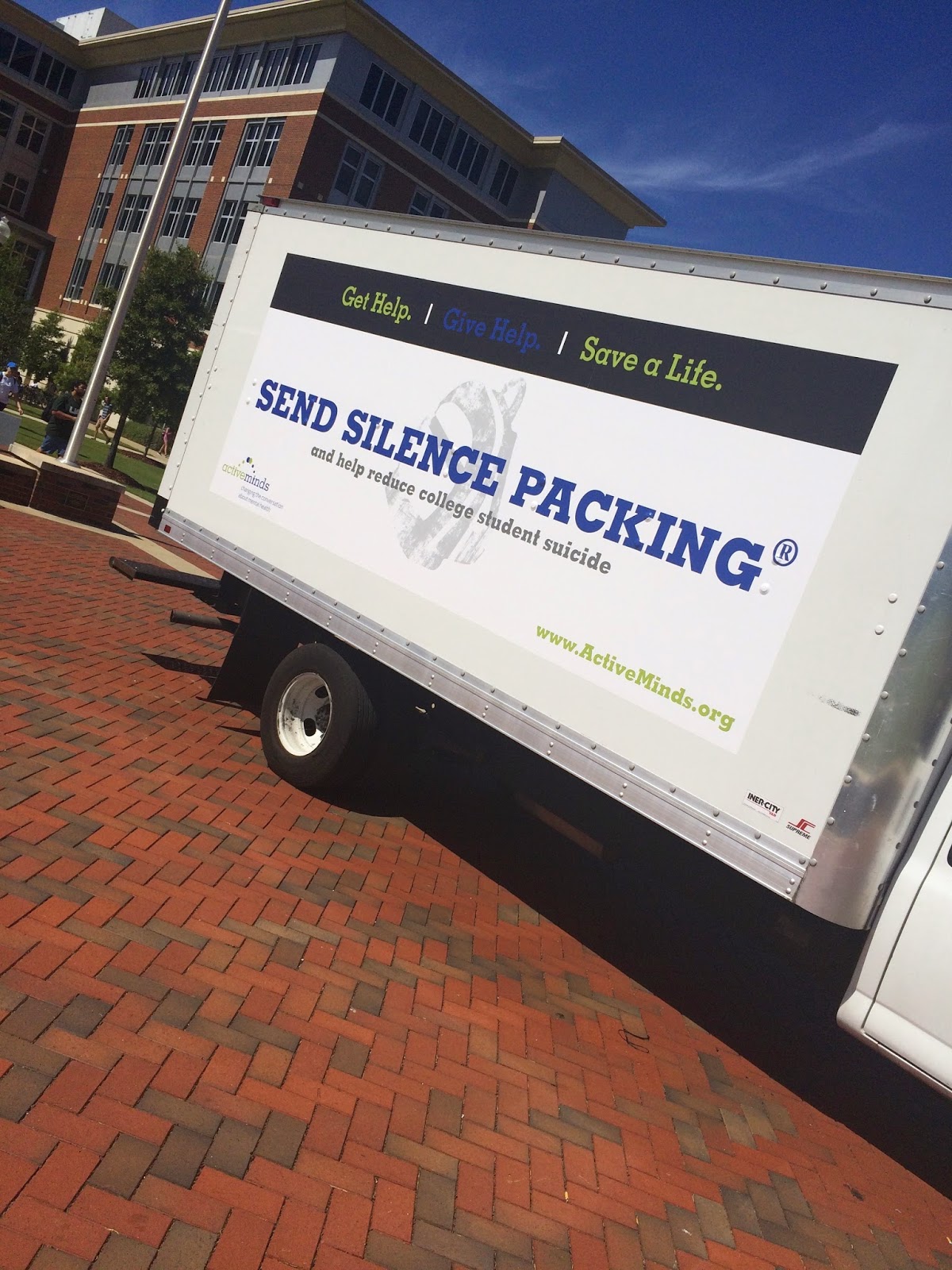 Students, faculty and staff held back tears while observing the moving display. Some stopped to read the stories while others stopped to seemingly pay their respects. Most were alarmed at the staggering statistics, and others identified closely with them. Under the flagpole, sat Brett Golson, who is a member of Ignite Ministries on the UAB campus. On his acoustic guitar, he played and sang songs of hope, love and light.  Supporters and workers from the local Crisis Center were on hand to provide students with adequate training on how to take care of themselves and how to help others. Counselors were  also present and  prepared to handle various situations that could have occurred during the event. News organization such as NBC, Alabama 13, and ABC 33/40  gathered to take photos and videos of the event.  This event went on to receive national coverage on NBC Nightly News with Brian Williams. (For a clip of the NBC Nightly News coverage, CLICK HERE).

Active Minds is an organization that no only exists to rise mental health awareness, but strives to change the conversation about mental health in hopes of breaking down the stigma surrounding mental health concerns.  Samantha Greenhalgh, junior, is the president of the Active Minds chapter at UAB.  "We were lucky enough to bring the Send Silence Packing tour once before in 2012," she expressed.  She went on to say that "the numbers should not be this high.  We need to make sure we are doing everything we can to make certain that no one suffers in silence." 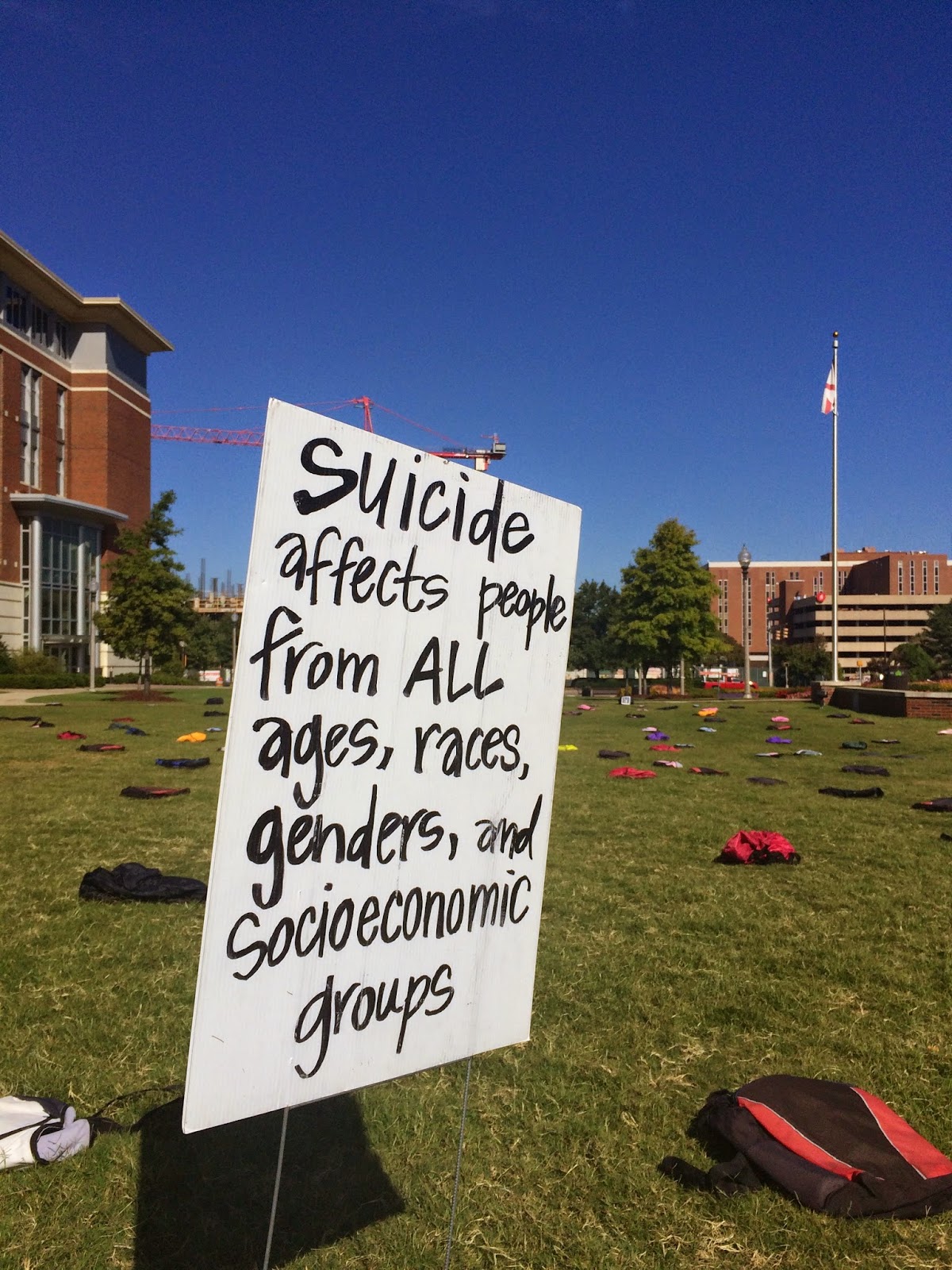 Funding for the event was provided by Student Health and Wellness Services (SHWO). In addition to providing various health services, the center exists to provide counseling services to promote students’ spiritual, psychosocial, and emotional wellness.  Conseulo Click, student health service counselor, is primarily responsible for bringing the exhibit to UABs campus for the second time. “We brought the Send Silence Packing tour to UAB in 2012, and decided to bring it back this year to continue to raise awareness,” she said. “It cost a lot of money, but we have to get the message out by any means necessary.”

“By any means necessary”  seemed to be the recurring theme during the event. Students and supporters alike all shared the idea that we must do all that we can to make sure that no one suffers in silence. They also share the idea that those who may be suffering must take any measures necessary to reach out for help. Suicide has claimed the lives of far too many students. In fact, the Crisis Center reports that suicide is the second leading cause of death among college aged students. Before completing suicide, many people leave what are called “peer warning signs” which may come in the form of helplessness, hopelessness, preoccupation with death, an increase or decrease in appetite, or a loss of interest in social activity. It’s important that students are aware of these signs and are able to pick up on them in their peers. 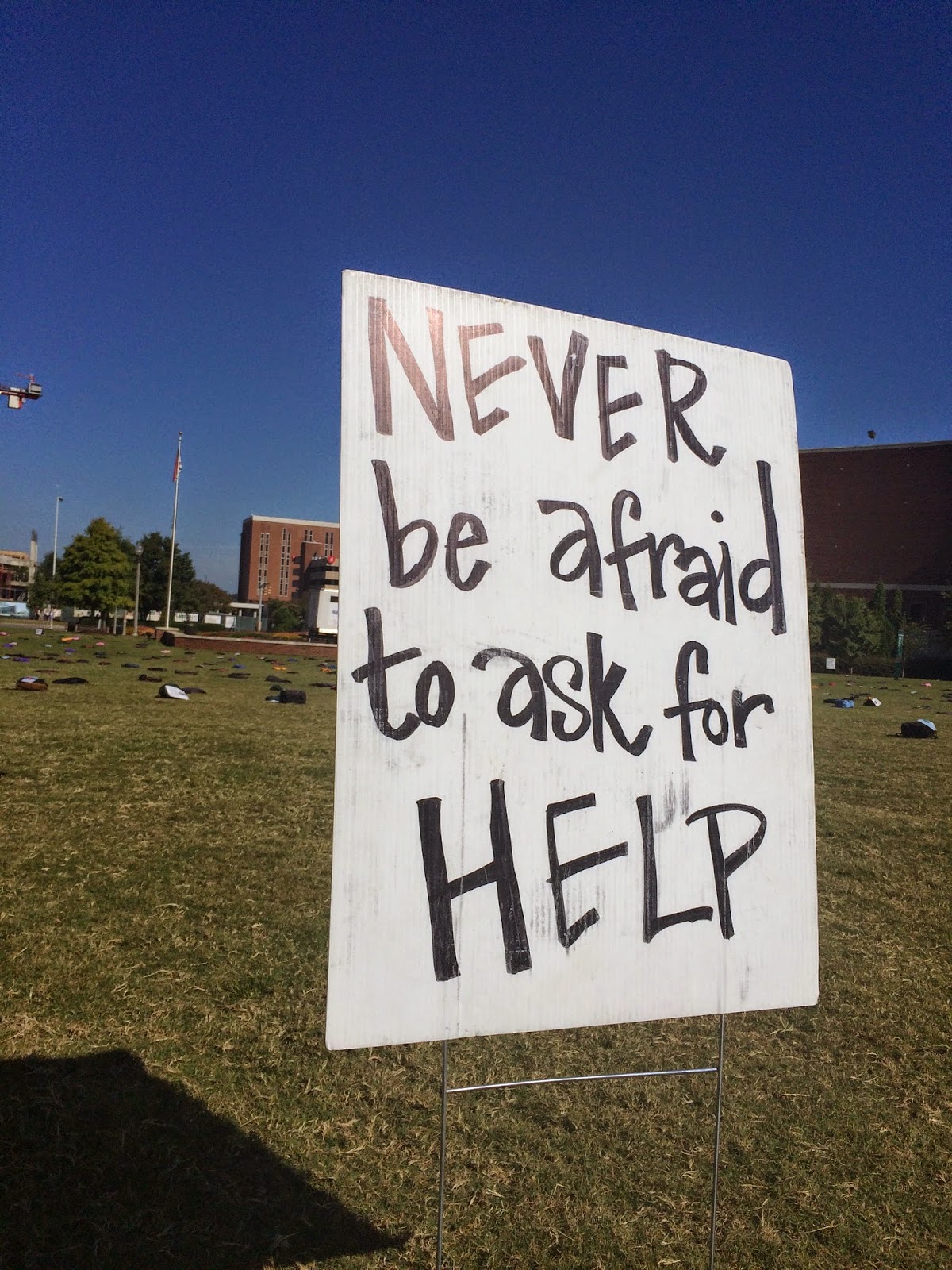 While there, I picked up some of the literature that was available. There were several forms that gave the statistics of the prevalence of suicide among various racial groups. It is reported that suicide is the third leading cause of death for African-American youth between the ages of 10 and 19. Suicide carries not only a stigma, but often brings about shame, particularly in African American communities where speaking to counselors and psychiatrists is taboo. As a student at UAB, I feel that by any means necessary, we must create healthy dialogue about mental health disorders across our campus so that we can play a part in helping to de-stigmatize those conversations surrounding suicide and therefore drastically decrease the 1,100 lives lost every year.  The day after the death of actor, Robin Williams, the National Suicide Prevention Line received more calls than ever before in its history.  This proves that there are still people suffering in silence. By any means necessary, we must alleviate the silence with bold messages of hope and our ability create life-saving conversations.


For more information on the “Send Silence Packing” campaign, visit the website at www.sendsilencepacking.org and follow the hashtags #reasonsispeak #Sendsilencepacking and #UABSSP
Posted by Unknown at 12:05 AM No comments: